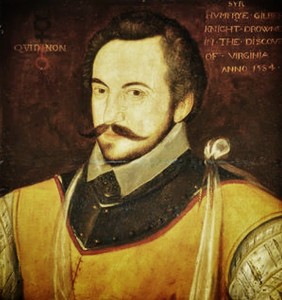 Sir Humphrey Gilbert (1539-1583) was an English noble and Member of Parliament, soldier and explorer. He was the half-brother of Sir Walter Raleigh and was knighted for his colonisation work in Ireland.

In 1583, he claimed territory in Newfoundland for the English crown and in doing so laid the foundation for the overseas British Empire.

He theorised that America was Atlantis, which was partially submerged allowing the creation of the Northwest Passage. His views were expressed in his 1566 Discourse of a Discoverie for a new passage to Cataia(China) [1650], which was not published until 1576. However, the archaic spelling in it make it a difficult read.