Alexandre-César Moreau de Jonnès (1778-1870) was a French soldier and adventurer. He wrote a number of books including 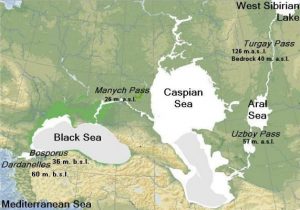 one[614] on prehistory in which he placed the Pillars of Heracles in the east and suggested that in the past there had been a large ocean of which the Black, Caspian and Aral Seas are just remnants. He located Atlantis in the Sea of Azov.

His ideas regarding the conjoined Black, Caspian and Aral  Seas has been resurrected in recent year by the more scientific investigations of individuals such as Ronnie Gallagher. The accompanying map highlights the connecting waterways linking these three lakes and the further connection to the West Siberian Glacial Lake during the last Ice Age, which lay on the West Siberian Plain considered to be the world’s largest unbroken lowlands.(b)

(b) A look at the glacial lakes of Siberia · john hawks weblog (archive.org) *