Lost Cities of Atlantis, Ancient Europe and the Mediterranean (L)

Lost Cities of Atlantis, Ancient Europe and the Mediterranean is one[620] of a series of books by David Hatcher 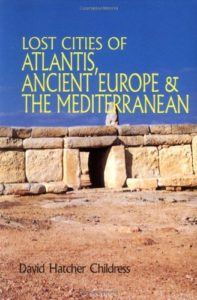 Childress that looks at ancient sites around the world. My principal complaint is that Childress seems unsure of whether he is a travel writer or a researcher into ancient civilisations. Effective editing could have reduced this volume to half its current 488 pages and lost none of its value. Additionally, an index would have enhanced it greatly.

Childress, true to form, sits on the fence and sees Atlantean links everywhere. Many of the cities discussed have clearly no connection with Atlantis and are not ‘lost’ but still in plain view. The author is also inclined to repeat material used in the other books in the series. However, as an overview of ancient European civilisations and their mysteries it is quite useful.

This book is one of a series on ‘Lost Cities’ around the world and is the only one to include Atlantis in its title, perhaps hinting that the author is tacitly supporting the Mediterranean region as the most likely location for Atlantis. Childress suggests (p261) that a landbridge linking Africa and Europe, at Gibraltar, was breached around 9000 BC flooding a mainly dry Mediterranean.