Obsidian is a glassy rock produced as a consequence of rhyolitic volcanic eruptions >and is usually dark blue in colour.< It was highly prized during the Stone Age when it was found to produce good sharp edges, suitable for tools and weapons, when fractured. Michael Grant remarked[661] ”it is the first traded substance of which there are material remains”.

Recent excavations in Northern Israel have revealed the use of obsidian tools over six thousand years ago(e).  The nearest source of obsidian was Anatolia, so these pre-Canaanite people must have had trade links that extended at least that far.

>It is interesting to read that obsidian was also considered valuable in North America  around 7000 BC, when obsidian artifacts were discovered at an underwater site in Lake Huron, using material that had been brought from central Oregon 2,000 miles away(h).< 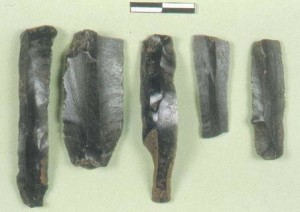 In 2011 it was reported(b) that a new technique, which permitted the dating of obsidian, revealed that the Greek island of Melos saw the mining of obsidian as early as 15,000 years ago and its exportation throughout the Aegean and beyond, which also is evidence of extensive marine travel at that early date.  However, 13,000 BC saw sea levels much lower than at present, as the Ice Age glaciation was still in place. This would have led to greater land exposure in the Aegean with shorter distances between islands, which were easily crossed with relatively primitive boats.

Massimo Rapisarda has noted that the only obsidian west of the Aegean in the Mediterranean, is to be found in the Central region on the islands of Lipari, Palmarola, Pantelleria and Sardinia(g) . A graduate thesis(f) by Barbara A. Vargo, explores in great detail the characteristics, history and distribution of Pantellerian obsidian.

Robert Ishoy who advocates a Sardinian location for Atlantis suggested(a) that obsidian, “commonly used on ancient Sardinia” was in fact the mysterious orichalcum referred to by Plato. On the other hand. 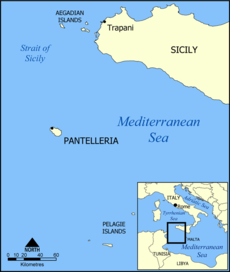 Christian and Siegfried Schoppe, who support a Black Sea location also identify obsidian as orichalcum. This is quite improbable, as obsidian would not easily lend itself to being used as a wall cladding.  This idea is even more impractical than Jürgen Spanuth’s proposal that orichalcum was a reference to amber. Apart from that orichalcum was described by Plato (Critias 116b-d) as a metal not rock.

Dr. Ellery Frahm at the University of Sheffield has now developed a method whereby a piece of obsidian can be traced, not only to a particular volcano, but to a specific quarry at the volcano(c).

In September 2013 Frahm revealed(d) that a new technique had been developed that permits the sourcing of obsidian artefacts in just 10 seconds.