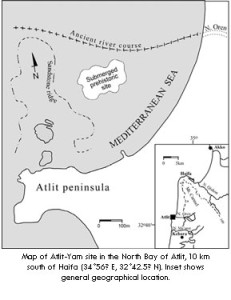 Atlit-Yam is the name of an underwater site, 10km south of Haifa in Israel, near the present small town of Atlit in about 10 meters of water 300 meters offshore. It consists of a complex of ancient buildings and graves, which were inundated around 6000 BC. A theory has now been developed that claims that a tsunami caused by a huge eruption of Mt. Etna in 6300 BC was responsible for the demise of Atlit(b), even though it was thousands of kilometres distant. An alternative theory is that the inundation of the site was the consequence of sea levels rising as the glaciers melted following the last Ice Age. Although no connection with Atlantis has been suggested, the latter theory gives food for thought regarding the possibility of similar Mediterranean sites.

Nevertheless, the popular press insist on referring to the site as Israel’s ‘Atlantis’ and so a Canadian film crew visited the location to produce a documentary on the late Stone Age site to be premiered in June 2013(a).