Hi–Brasil or Hy–Brasil is sometimes referred to as the Irish Atlantis and is a name given to a legendary island to the west of Ireland. It is frequently referred to as the Fortunate Island, which has obvious resonances with the Hesperides. Another appellation in Irish is Tir fo-Thuin or Land under the Wave. A further explanation offered for the origin of the name is that it is derived from an ancient term ‘brazil’ that refers to the source of a rare dye, which is reminiscent of the expensive purple dye extracted from the Murex snail, traded by the Phoenicians.

>Marin, Minella & Schievenin in The Three Ages of Atlantis [972.375]  propose that the island of Thule described by Pytheas was the legendary Hi-Brasil, which, they further claim, was part of the Porcupine Bank that they describe as ‘recently submerged’.<

The Genoese cartographer, Angellino de Dalorto (fl.1339), placed Hy-Brasil west of Ireland on a map as early as 1325. However, on some 15th-century maps, the islands of the Azores appear as Isola de Brazil, or Insulla de Brazil. Apparently, it was not until as late as 1865 that Hy-Brasil was finally removed from official naval charts. Also found on medieval maps was another mystery island south of Brasil, sometimes appearing as Mayda, Asmaidas or Brazir(d). 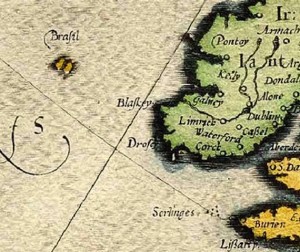 One of the most famous visits to Hy-Brasil was in 1674 by Captain John Nisbet of Killybegs, Co. Donegal, Ireland. He and his crew were in familiar waters west of Ireland, when a fog came up. As the fog lifted, the ship was dangerously close to rocks. While getting their bearings, the ship anchored in three fathoms of water, and four crew members rowed ashore to visit Hy-Brasil. They spent a day on the island and returned with silver and gold were given to them by an old man who lived there. Upon the return of the crew to Ireland, a second ship set out under the command of Alexander Johnson. They, too, found the hospitable island of Hy-Brasil and returned to Ireland to confirm the tales of Captain Nisbet and crew.

The last documented sighting of Hy-Brasil was in 1872 when author T. J. Westropp and several companions saw the island appear and then vanish. This was  Westropp’s third view of Hy-Brasil, but on this voyage, he had brought his mother and some friends to verify its existence.

Donald S. Johnson has also written an illustrated and more extensive account of the ‘history’ of Hi-Brazil in chapter six of his Phantom Islands of the Atlantic [652].

A modern twist on the story arose in connection with the Rendelsham UFO(b) mystery/hoax(c) of 1980 when coordinates that correspond to one of the Hy-Brasil locations were allegedly conveyed to one Sgt. Jim Penniston who kept it secret for thirty years(a)!

In 2010, the September 11th edition of the London Daily Mail (and its sister paper, the Irish Daily Mail) ran an article with the adventurous headline “The Atlantis of Connemara” that included the accounts of 20th-century witnesses to unexplained visions off the west coast of Galway. Included was a potted history of recorded sightings since 1460.