Gateway to Atlantis [072] by Andrew Collins is one of the better books on the subject. It is a fully indexed and referenced work that clearly indicates the effort and depth of research that went 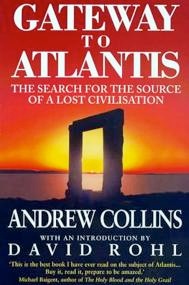 Collins was originally inclined to believe that the Antarctic had been the home to Atlantis but has gradually come to focus his attention on the Caribbean. He has trawled the classical writers for any possible reference to Atlantis and has concluded that all their considerable evidence points to the Atlantic and in particular the Caribbean as the location of Atlantis.

In order to explain the sudden destruction of Atlantis, Collins discusses the possibility of some kind of cometary or asteroidal impact being the culprit. He is inclined to see the Carolina Bays as remnants of this collision. His conclusions are closely mirrored by the views of Emilio Spedicato. More details can be found on Collin’s website(a).

Paul Jordan, an Atlantis sceptic, has written a critical review of Collins’s book in his Atlantis Syndrome[418] , part of which is now available online, spread over four papers(b).