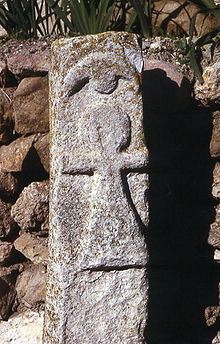 Tanit  was a Carthaginian and Phoenician goddess. Immanuel Velikovsky claimed that the name of modern Tunis, near the site of Carthage, is a cognate of Tanit. She was also adopted by the Berbers and claims have been made that Tanit was also a Hyksos goddess.

The Egyptian city of Sais where Solon first learned of Atlantis had it principal temple dedicated to the goddess Neith, whom the Egyptian priests identified with Athene. In turn, Neith is also associated with the Libyan goddess Tanit.

The whole matter of the relevance of Saïs to the Atlantis story has been challenged by the theory(a) that Saïs and Tanis, named after Tanit, were in fact the same location. A starting point is the fact that the current village of Sa el Hagar adjacent to the ruins of Saïs has a counterpart at Tanis where there is a village called San el Hagar. Drawing on the writings of Strabo, Herodotus and the Bible some have concluded that the two cities were one. Velikovsky also proposed this idea in his Ramses II and His Time[0832.209], noting that “Tanis is mentioned in Scriptures as the capital of Egypt when. according to both the conventional plan and this reconstruction, Saïs was the capital.”

The island of Es Vedra off the west coast of Ibiza, the third largest of the Balearics, has had a number of imaginative myths, old and new, associated with it, including one that it is supposed to be the birthplace of Tanit!