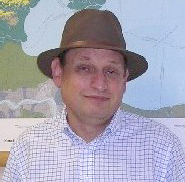 Paul V. Heinrich is a geologist and archaeologist at Louisiana State University and described by some as a professional sceptic. He has an interesting website(a) where he discusses what he describes as the ‘wild side of geoarchaeology’ and elsewhere(b) attacks Charles Hapgood’s interpretation of ancient maps that seem to support the idea of an ice-free Antarctic.>Similarly, he wrote a critique(f) of the American TV show,  The Mysterious Origins of Man, fronted by Charlton Heston, which also dealt with the Antarctica question.<

He has also heavily criticised(c) Andrew Collins’ Gateway to Atlantis.  Furthermore, Heinrich denounced what he describes as ‘old-time cosmic catastrophism’ including an attack on Emilio Spedicato, apparently intent on shooting both message and messenger. Among his other targets were the Bosnian pyramid claims of Samir Osmanagich, which he pointed out are natural geological features that are “called ‘flatirons’ in the United States and you see a lot of them out West.”(e)