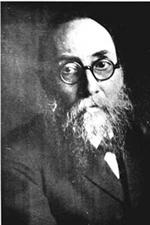 Paul Jules Antoine Meillet (1866-1936) was a leading French linguist in the early part of the 20th century. He is probably best known for his Persian, Armenian and Homeric studies. Alexander Braghine claimed[156.43] that Miellet believed that all European languages were derived from the original tongue of the Atlanteans.