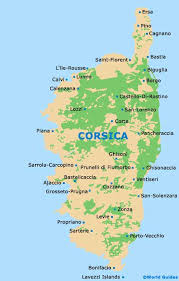 location for Atlantis until the end of the 18th century when>according to Joscelyn Godwin [0746.36],<Antoine Court de Géblin proposed Corsica and Sardinia as the location of Atlantis.

>However, Atlantisforschung claims that as far as is known, Corsica was first associated with Atlantis, later, in 1840. At that time it was the lawyer Angelo Mazzoldi, an ardent Italian nationalist, who claimed in a treatise that Italy had once been Atlantis, the center of which was somewhere near Corsica. He dated the sinking of Atlantis to 1986 BC(e).<

Corsica did not feature again for over a century until 1929 when this idea was proposed at a meeting of the Society for Atlantis Studies, held in the Sorbonne in Paris, a delegate threw two tear gas bombs in order to prevent the dissemination of such ‘heresy’.

It may be worth considering that the Weshesh, listed as one of the Sea Peoples, have been identified with the inhabitants of Corsica among others. In the latter part of the 2nd millennium BC, a civilisation known as the Torreans occupied the region around Ajaccio. Like the Nuraghic people in nearby Sardinia, they also built towers, but smaller in size.

Before the Torreans, there was a string of megalithic dolmens stretching from southern Corsica across to northern Sardinia as if outlining a pilgrimage route. Frederico Bardanzellu’s website(a) offers more information on this and other aspects of the prehistory of these two islands, including a study of any possible astronomical significance that might be deduced from the orientation of the dolmens on both islands.(d)

Luigi Usai is currently (2021) promoting [1814] the idea that a conjoined Sardinia and Corsica had constituted the island of Atlantis!(c) He has named Sulcis at the southern end of Sardinia as the location of its capital.

In July 2021 I was sent a number of images that purported to show anomalous underwater images in the Central Mediterranean northeast of Malta. At first sight, they appeared to show extensive manmade features. However, further investigation by the person who sent them to me eventually discovered that the images were the consequence of the flawed computer interpretation of sonar data. In December 2021 Luigi Usai produced the same flawed imagery as evidence that he had discovered a lost submerged civilisation!

So that there is no misunderstanding let me state that I have advocated a Central Mediterranean location for Atlantis for some years. If Sardinia and/or Corsica hold that location, I am more than happy to congratulate Usai and Frau. But, I am not convinced by satellite imagery that has so often been proven to be flawed.