Pliny the Elder (23 -79 AD), or more correctly Gaius Plinius Secundus, was a Roman writer and naturalist whose only extant work 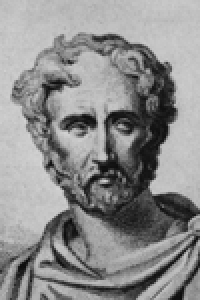 is the 37 volume Historia Naturalis, considered to be the first encyclopaedia. It was Pliny the Elder who was credited with saying “that the only certainty is that nothing is certain.”

Pliny makes a number of references to Atlantis that give us small clues to add to the writings of Plato. Jürgen Spanuth quotes Pliny where he recorded (vi.49) how in Sogdiana, in today’s Uzbekistan, there was reputed to have been an altar and ‘Pillars of Heracles’. Pliny also describes (vii.56) the encounter between the Athenians and Atlanteans as the first recorded battle. Interestingly he also refers to this conflict being fought with wooden sticks hardened by fire since they did not have iron. We can also infer from this comment that they did not have bronze either, thus setting the war in the Stone Age. Pliny’s comment would therefore place this event somewhere between 4000 BC and 2000 BC.

Anton Mifsud notes[209] how over the centuries various versions of Pliny’s text have been guilty of omissions and amendments. Pliny refers to Atlantis on a number of occasions but individual translations have omitted different references to ‘Atlantis’, ‘the islands of Atlantis’ and the Atlantic Sea. While it is accepted that Pliny’s writings do contain errors such arbitrary meddling with the text by translators does little to inspire confidence in the average reader!

Pliny in his remarks on the islands off the west coast of Africa notes that there was an island ‘off Mount Atlas’ called Atlantis (vi.36).

Intriguingly, Pliny describes Italy as being shaped like an oak leaf (iii.43), an image that inspired Camillo Ravioli to produce a matching speculative map of ancient Italy.

Pliny died, after being overcome by fumes, while trying to study the 79 AD eruption of Vesuvius.