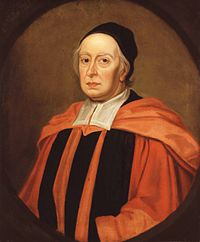 John Wallis (1616-1703) was an English mathematician who is credited with the introduction of the symbol for infinity used today. It is also known that he took the story of Atlantis literally. Dr Renaud Morieux tells us[1262.42] that Wallis believed that over time the narrative became distorted but he concluded that the story of the sinking of Atlantis related to the destruction of the landbridge between Britain and France, isolating England, which was Atlantis(a) !