Isaac Casaubon (1559-1614) was born in Geneva where he became a professor of Greek. He later worked in France and England, but finally settled on 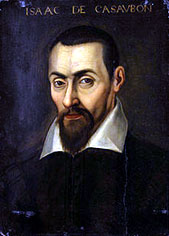 editing Greek literature as a more rewarding occupation. Among his works was a 1587 commentary on Strabo and it was this production which inadvertently brought him into the Atlantis controversy in the early part of the 19th century.

In commenting on Strabo 2.3.6., Casaubon refers to Aristotle doubting the existence of the Achaeans walls reported by Homer in the Iliad. Casaubon notes that this statement was taken by Posidonius, who then inserted Plato’s Atlantis in place of the Achaean walls. Franke explains that this was done “in order to reject this comparison.” Nowhere does Casaubon attribute to Aristotle any claim that Atlantis was an invention by Plato.

However in 1816, Jean Baptiste Joseph Delambre when referring to Casaubon’s commentary hastily misinterprets the passage and describes Atlantis as the object of Aristotle’s doubt. This error was then repeated by later writers until gradually the idea reached critical mass so that in the 20th century it became “received wisdom”.

Nevertheless, in 2012, Thorwald C. Franke published a complete refutation of this incorrect addition by Delambre in his forensic study Aristotle and Atlantis[880], an English translation of the original German.