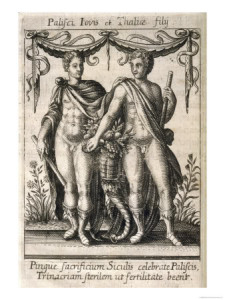 The Palikoi (Palici) were the divine twin sons of Zeus and considered as the gods of oath-taking. Their sanctuary at the Rocchicella Hill, in the Caltagirone River valley south of the Plain of Catania in Sicily, has been identified by Thorwald C. Franke as the location of the capital of Atlantis. The area was important for the Sicels, one of the groups that probably made up the Sea Peoples. Further west at Agrigento there is another temple dedicated to a better known pair of twins, Castor & Pollux also known as The Dioscori.