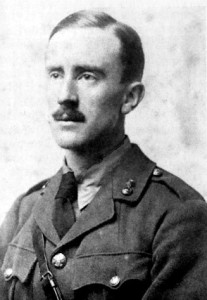 John Ronald Reuel Tolkien (1892-1973), the celebrated author of The Lord of the Rings trilogy, had devoted considerable time, during his mid-twenties, to working on a book, to be called Numenor, based on theAtlantis story(a).  Unfortunately, around 1916, when the photo on the right was taken, he had to abandon this enterprise as he felt it had become ‘too grim’.