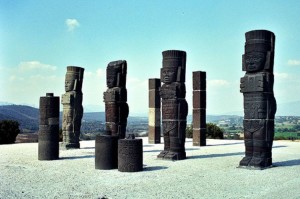 Atlantes is an architectural term used to describe supporting columns in the form of standing or kneeling men, but in ancient times it was the name given by Herodotus, sixty years before Plato, to the inhabitants of the ancient kingdom of Mauretania in north west Africa. The term is also applied to the 15-foot statues in Tula, Mexico.
Tagged Atlantes, Herodotus