Atlantis: The Seven Seals [549] by Zoltan Simon endeavours to demonstrate that the Caribbean was the centre of the 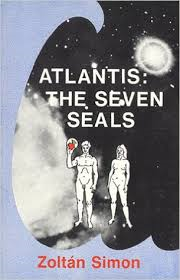 Atlantis Empire. He invokes genetic, linguistic and cultural links to support his thesis. On the Amazon.com site, Dr. Mark Newbrook has written very critically of Simon’s alleged linguistic conclusions(a), which provoked an acidic response from Simon(b).

However, Simon has produced an original, interesting and thought provoking volume, although somewhat disjointed. He devotes considerable space to an interpretation of the ancient Aztec calendar. Simon, with a somewhat extreme degree of ethnocentricity, introduces Hungarian connections wherever possible including evidence for a pre-Columbian Hungarian presence in America. Nevertheless, Simon had parts of his book transmitted by the Canadian Broadcasting Corporation.