The Bering Strait between Asia and America has been a source of the ongoing controversy regarding the peopling of America. 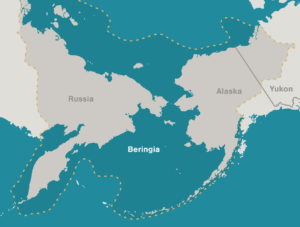 By the end of the 18th century, the importance of the Strait had been recognised, when Paul Felix Cabrera wrote “That most troublesome of all the difficulties hitherto started by authors respecting the passage of animals to America, particularly of the ferocious kinds at enmity with man, even retaining in full force the plausible reasons so ingeniously urged, if not entirely removed, is nearly surmounted by the discovery and examination of Anian or Behring’s straits’ which are of no greater breadth than thirteen leagues from shore to shore, and where, by means of the ice, the two continents of Asia and America are connected; this would afford a practical route not only for animals but men, from whom it is possible to suppose that those who inhabit the most northerly countries from the straits as far as Hudson’s and Baffin’s Bays, and from the Frozen Sea to California, New Mexico, and Canada to the southward, are descended.” (s) 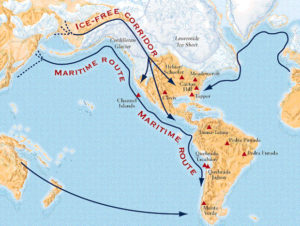 However, there is now compelling evidence that people reached South America before the existence of the northern ice-free corridor, suggesting the alternative coastal migration route, which, so far, has little evidence to support it. This recent report is the result of excavations at the Huaca Prieta ceremonial mound, 600 Km north of the Peruvian capital, Lima. Human activity there has now been dated to around 15,000 years ago(e). Further evidence has now emerged(p) that the peopling of America was not carried out by a single group, but by immigrants from different geographical areas.

Pre-Columbian contact between Asia and Alaska was confirmed by a report(b) from Purdue University in September 2016. Artefacts were discovered in a house dated between 700 and 900 years old. The bronze items were identified as having been smelted in Asia, while a leather strap was radiocarbon-dated to between 500 and 800 years old.

>Further supportive evidence of the use of the Beringia landbridge was uncovered at Alaska’s Swan Point site where human occupation has been dated as far back as 14,000 years ago. “Another notable aspect of Swan Point is the role it has played in understanding  the prehistoric migration of peoples into the Americas. A type of stone tool, the microblade, which was unearthed at the site, has been found to resemble those used by the Dyuktai people, who lived in Siberia around the same period. This shows that people crossed from Siberia to Alaska on the  Beringia land bridge.”(t)<

Late August 2019 saw the dating controversy surrounding the arrival of the First Americans re-ignited with a study that pushes the date back to over 16,000 years ago(l). This is based on archaeological discoveries at Cooper’s Ferry in Idaho. This earlier date suggests that the ice-free corridor would not have been available to these people, but are more likely to have used the coastal route from Asia via the Bering Strait. A secondary matter raised by these finds is that “Based on their analysis of the stone tools from Cooper’s Ferry, the researchers suggest that they are most similar to artifacts of the same general period found on the other side of the Pacific. Specifically, they appear to share many traits with tools produced on the northern Japanese island of Hokkaido 13,000-16,000 years ago!”

The idea that the Clovis people were the first Americans is gradually losing support as the evidence found at Cooper’s Ferry and other sites indicate otherwise. A recent paper on the National Geographic website supports such a revised view(q).

(l)  First Americans Arrived More Than 16,000 Years Ago, According To Find In Idaho | Discover Magazine (archive.org)