William Stephens Blacket (1810-1894) was an English tailor by trade. However after retiring, in 1884 he produced, The Lost Histories of America[1180],  in which he claimed that Atlantis had been located in the Atlantic based on his interpretation of Plato and 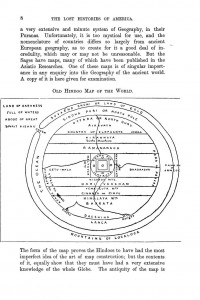 an ancient Hindu map.  Part of the sub-title of his book is The zodiac shown to be an old terrestrial map in which the Atlantic isle is delineated. He also thought that most of Greek mythology was based on a misinterpretation of the same astrological zodiac!

His ideas are far from convincing, but considering that this book was published only two years after Donnelly’s, it must have, to some extent, addressed the newly found public interest in Atlantis.

His book is freely available in various formats on the Internet(a).