Sumeria was unknown until the middle of the 19th century. With the discovery and the decipherment of the Sumerian cuneiform tablets the sophistication of their culture prompted the idea that Sumer had been ‘the cradle of civilisation.’ Subsequent discoveries, such as the those in the Indus Valley and more recently  Göbekli Tepe have now somewhat diluted that idea.

The origin of the Sumerians is still something of a mystery as is their language which seems to be an ‘isolate’, unrelated to any known language group. Ronnie Gallagher has suggested that migrants from the Caucasus had provided the impetus that led to the development of the Sumerian civilisation. Gallagher’s theory is supported by Jerald Jack Starr on his Sumerian Shakespeare website, who emphatically attributes a Caucasian origin to the Sumerians(l).

>Emilio Spedicato has controversially suggested that the Sumerians came from the Tibetan region!(m)< 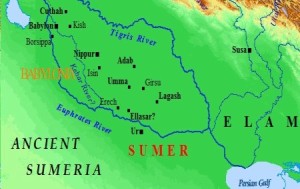 Sumeria has now been proposed as a possible source of the Atlantis story. Dr. Ashok Malhotra, a professor of Engineering, has suggested(a) that that ‘the likelihood of the Atlantis stories being of Sumerian origin is strengthened by the fact that the submergence of ancient cities was a strong part of the Sumerian mythology. It dominates their historical tradition. The destruction of the ancient city as a result of sin was also part of their beliefs.’ Malhotra then proposes that these Sumerian stories reflected actual flooding events in the Indus Valley region that were brought first to Sumeria and then were later transferred to Egypt and from thence via Solon to Plato to us.

George Michanowsky went much further and claimed that the Sumerians had known Atlantis under the name of NI-DUK-KI, known today as Dilmun[282.66]. The renowned Henry Rawlinson interpreted this name to mean ‘blessed hill’ or ‘blessed isle’. While Michanowsky’s suggestion is highly speculative, if correct, it would be the earliest known reference to Atlantis.

The Sumerian king list(e) from Larsa records eight kings (some versions note ten) before the Deluge, which may have been reflected, in a distorted fashion, in the ten patriarchs of Genesis and/or the ten kings of Atlantis! Another suggested link is with the eight generations between Adam and Noah recorded in Genesis chapter 5.

John Sassoon would seem to support Malhotra’s thesis in his book[566], which proposes a Sumerian origin for the Jews with possible earlier links with the Indus valley. He is not concerned with Atlantis, just the ancestry of the Jewish people of whom Abraham was born in Sumeria around 2000-1800 BC. Sassoon’s views offer a possible transmission route for Eastern traditions and myths to have reached Egypt and subsequently through Solon to Athens.

>More recently, Dr. Willem McLoud, a South African researcher, commented that “we have good reason to think that Atlantis was not located beyond the pillars of Heracles in the Atlantic Ocean, as is so often propagated, but that it was actually none other than the ancient land of Sumer itself.” Mcloud is primarily concerned with the Sumerians and Akkadians, which he will expand on in a forthcoming book(n).<

In 2001, a book by Radek Brychta was published in the Czech Republic in which he also advocates a Sumerian connection. He identifies Atlantis with the legendary Dilmun of Sumerian legend and locates it on the Indus civilisation island of Dholavira. Excerpts from this fascinating book are available on the Internet and worth a read.

However, the most extreme claims came from Zechariah Sitchin who proposed that the Sumerians had been ‘influenced’ by ancient astronauts from the planet Nibiru, which information is to be found in their cuneiform tablets if Sitchin’s translation is to be believed. Similar daft ideas(g) have been put forward by Hermann Burgard[1316] but so far have only been foisted on a German-reading public.

As if that was not bad enough, we now (Oct 2016) have the Iraqi Transport Minister claiming, among other matters, that the Sumerians launched spaceships 8,000 years ago(h)!

The Sumerian texts also crop up in the wild theories of Dieter Bremer[1022] and Jakob Vorberger, who claim that Atlantis was a space station(I)!

Jim Allen, the leading advocate of ‘Atlantis in the Andes’ has also claimed(b) a Sumerian connection with South America citing  Ruth & Alpheus Hyatt Verrill, who include in their book[838.293] three pages of Sumerian words compared with the language of ancient Peru as well as other cultural aspects there. They also believed that Sargon (2369-2314 BC) was known in Peru as the deity Viracocha! Their fanciful idea stems from an account of Sargon sailing to the west and spending three years there!  Zhirov supported this claim[458.23] describing it as ”a seemingly semi-fantastic theory”. My reason for considering this claim to be nonsensical, is simply that Sargon was continually engaged in expanding his empire and constantly dealing with rebellions in the various city states that he ruled over. The idea that he took three years out to visit America, 14,000 km away, is in no way credible.

Nevertheless, the idea of Sargon in South America persists with James Bailey repeating it in Sailing to Paradise[0150.66] and more recently by the Afrocentrist, Clyde Winters in an article on the Ancient Origins website(f) in which he quotes Bailey and the Verrills as supporting Lake Titicaca as the Lake Manu of Sumerian tradition. A further article(j) on the same website begins with the forceful claim that “it is becoming increasingly clear that the Sumerians had established a colony in South America called Kuga-Ki.” The paper is based on a series of questionable artifacts, the Fuente Magna Bowl, the Crespi Collection and the Pokoyia monument!

The Fuente Magna Bowl is frequently offered as evidence of a pre-Columbian link with the Sumerians(c), although its provenance is unclear and there are suggestions of a hoax. A sceptical view of the ‘Bowl’ by Carl Feagans(k) is available.

The very existence of Sumerians has recently been attacked in an appendix to The Three Ages of Atlantis[972] by Marin, Minella & Schievenin. They maintain that the Sumerian ‘language’ “could be an artificial construct created by Akkadian priests” to be used for liturgical purposes. These ideas were first expressed at the end of the 19th century by the respected Orientalist, Joseph Halévy. Andi Zeneli has expressed comparable ideas(d) regarding the Sumerian language.