The Bock Saga is claimed to be an oral tradition transmitted within the Bock family in Finland until finally written down in 1984 by Ior Bock (1942-2010), the last survivor of the family. To add to our 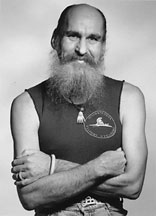 excitement Ior also believed that he is descended from the ancient Finnish god Lemminkäinen. A cursory investigation of any of the websites(b) dealing with the Bock Saga will reveal it to be a collection of balderdash. I give an example below:

“According to the Sa-Ga, the first major changes occurred just over 50 million years ago resulting in a shifting of the Pole causing all the lands to become ice. This was known as the time of “all the lands ice” – ALTLANDIS (note spelling) – otherwise known as Atlantis. Atlantis was not so much a location as it was a time in history”.

*The Official Bock Saga Website also delights us the added information that the populating of the world “began at the old north pole, expanding over millions of years and carefully recording it’s history for future humans to enjoy and appreciate until it was interrupted 50,010,019 years ago (as of July 24, 2003). At that time Earth’s axis of rotation declinated, and the original and long standing breeding and information system suddenly and catastrophically came to an end as ICE TIME abruptly befell this formerly entirely tropical planet.” (b)*

Quite frankly I would expect readers to glean more information about Atlantis from a Harry Potter book than the Bock Saga.