John Philip Cohane is an American archaeologist with Irish ancestry who published  The Indestructible Irish[1254]  in 1969, 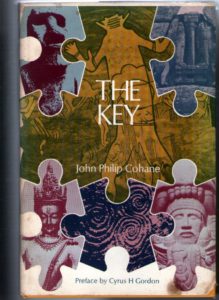 which included a proposed Mediterranean origin for the Irish. This was followed a few years later by The Key[0971], in which he proposes a form of hyperdiffusion based on his view of global linguistic connections. If he was on thin ice with The Key, in my opinion, he fell through it with his third offering in 1977, Paradox: The Case for the Extraterrestrial Origin of Man [1250].

In The Key he touches on the subject of Atlantis when he claims that “much of Donnelly’s research tends to support the major premise of this book” (p23).