A Ron Fletcher, according to Rodney Castleden[225.189], saw the Roman 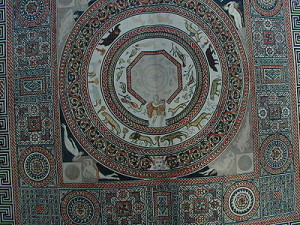 Orpheus Mosaic in Woodchester(a), Gloucestershire and concluded that it depicted a map of Atlantis. Not content with that, he also claimed it as a star map as well as King Arthur’s Round Table, ignoring the fact that King Arthur is reputed to have lived long after the Romans left Britain. It is silly statements such as Fletcher’s that discredits serious Atlantis researchers. I have no other information regarding Fletcher,*[ apart from the fact that he appears to have self-published his ideas in a short book[1138].