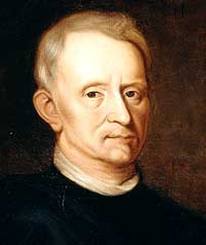 Robert Hooke (1635-1703) was an English polymath, who at one time was an assistant to Robert Boyle, the first modern chemist. His Cutlerian Lectures to the Royal Society were published posthumously in 1705 [1764]+. In his Discourse of Earthquakes, he frequently mentions Atlantis, about which he was sympathetic to its existence, placing it in the Atlantic, with islands such as the Canaries as its remnants.