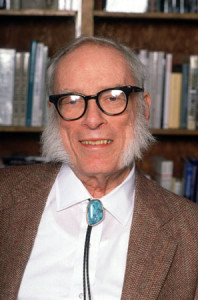 century. He was best known for his science fiction writing but also wrote many popular science books. His total output is reckoned to exceed 500 books, written or edited.

Asimov wrote the foreword to H. R. Stahel’s Atlantis Illustrated[0560] in which he expressed the view that Plato’s Atlantis story was inspired by the catastrophic destruction of Thera and then subsequently embellished it with a location in the far west.*Stahel’s text supports an Atlantic location centred on the Azores.*

Perhaps he expressed greater wisdom when he wrote that “There is no belief, however foolish, that will not gather its faithful adherents who will defend it to the death.” –The Stars in Their Courses (1971)