Léonce Joleaud (1880-1938) was a French Professor, without chair, of Geology and 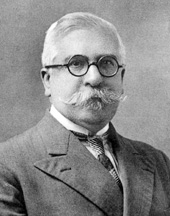 Palaeontology, Faculty of Sciences in Paris (1927-1938). In 1928 he became president of the Geological Society of France and in the same year he published a paper entitled L’Atlantide envisagée par un Paléontologiste (Atlantis considered by a Paleontologist). He was satisfied that Plato’s island had been located in Southern Tunisia, a view similar that of many of his compatriots at that time.