Paul Kiritsis (1979- ) is an Australian of Greek extraction. He is a poet and 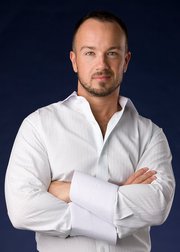 esotericist with an interest in religion, mythology and occultism. He is a member of the Rosicrusian  group AMORC and of the Greek Australian Cultural League. His website(a) covers a range of subjects including  a two-part article(b)(c) on Atlantis. In it he frequently refers to the Minoan Hypothesis but concludes that “the plausibility of the aforementioned (Minoan) theory holds up only if we reject Plato’s account as a mistaken or wild embellishment of historical truth and as a worthless theory which must continuously shun evidence to stay alive”. Kiritsis thinks the Atlantis story was just a morality tale.