Mesopotamia was an area of the Middle East that corresponds to most of modern Iraq together with some surrounding areas.

>While Mesopotamia is widely known as the ‘cradle of civilisation’ there does seem to be a move to extend the regions to which this appellation can be justifiably applied. In a 2007 article in Science magazine, Andrew Lawler noted that “While Mesopotamia is still the cradle of civilization in the sense that urban evolution began there, we now know that the area between Mesopotamia and India spawned a host of cities and cultures between 3000 B.C.E. and 2000 B.C.E.” (f)<

It was first suggested by G.F. Oviedo y Valdes, in 1535, as the location of Atlantis. After its inundation, he claims that the survivors fled to the Americas. 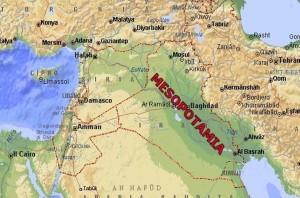 An article(c) by Marilyn Luongo also attempts to link Mesopotamia with Atlantis, beginning with locating the ‘Pillars of Heracles’ at the Strait of Hormuz and then using the highly controversial interpretation of ‘meizon’ to mean ‘between’ rather than ‘greater’, she proceeds to argue that Mesopotamia is ‘between’ Asia and Libya.>She cited Andreea Haktanir in support of this interpretation of meizon.<