The Basques of southwestern France and northern Spain have an extremely 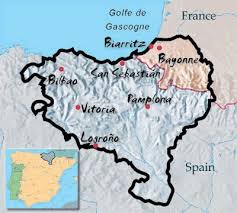 ancient and distinctive culture that includes a language, Euskara, with no undisputed link with any other language. The late Larry Trask (1944-2004) provided a sober view(a) of the language while Edo Nyland (1941-2009) perceived extensive links between Basque and other languages, including that of the Ainu people of northern Japan!(l)

However fanciful this idea may seem, there appears to be little doubt that the Basques, master whalers of the 16th and 17th centuries(i), had regular contact with the coast of Labrador(j).

An 18th-century abbot, Dominique Lahetjuzan (1766-1818?), announced that his studies indicated that Euskara had been spoken in the Garden of Eden! In the 19th century, S.H. Blanc offered examples[155] from the language that implied great antiquity. One was that the Basque word for knife means literally “stone that cuts,” and that the word for ceiling means “top of the cavern”.

One website(c) is devoted to establishing a link between the Basques, Atlantis and the Algonquins of North America. Bizarrely, at the end of the 19th century, a study of land snails in the Pyrenees led Léopold de Folin to suggest that the ancestors of the Basques came from Atlantis! William Corliss supported the idea of the Basques preceding Columbus and suggested that inscriptions identified as Basque were found in the Susquehanna Valley of Pennsylvania(n).

A further tale from Braghine records how a person from Georgia in the Caucasus was similarly understood by Basques. This would normally be considered some sort of an urban myth but it should be noted that the linguist Arthur Holmer who is studying(b) the connections between the languages of the Caucasus and Basque believes that the number of similarities are too great to be explained by coincidence alone. A recent (2019) BBC article has highlighted claims of possible linguistic, toponymic, mythological and even DNA links between Armenians and Basques(k). It is interesting that Armenia and Georgia are neighbours.

It is frequently noted that the Basques have a legend that they originally came from Atlantis, which they call Atlaintika. Since names, such as ‘Atlantis’,  recorded by Solon were Hellenised versions of the words found in the temple ‘registers’ in Sais, it seems more likely that the Basques would have had a different word to describe any former homeland. It is probable that ‘Atlaintika’ is a modification of a loanword adopted from their neighbours.

In the 19th century, Edward Taylor Fletcher discussed possible links between the Basques and Atlantis in an 1863 paper(m).

Apart from the suggestion of language similarities, some have pointed out facial resemblances between Central American Indians (old Maya or modern Lancadon Indians) and Basques. The Basques believe in a mythical seven-headed serpent (disintegrating comet?), Erensuge while the Aztecs worshipped snakes. The Basques used to count in twenties rather than tens, a practice also found in Central America. The Basque ballgame of jai alai played with a wicker basket tied to the players’ arm is vaguely similar to pok-ta-pok played by the Maya. Fortunately, the Basques did not adopt the Mayan custom of beheading the captain of the losing team. It is reported that both the Basques and the Indians of Mexico and Peru practised artificial head flattening.

The Cro-Magnons were tall with larger brain capacities than modern humans. They occupied areas of France and Spain at the end of the last Ice Age. They were similar to the Guanches of the Canary Islands. It is thought that the Basques are related to them. The Cro-Magnons were also artistically talented although limited to primitive tools.

>Nevertheless, Dominique Görlitz has written a two-part article for Atlantisforschung in which he offers the suggestion that the Toltecs had been influenced by Basque visitors(o). “In addition to the well-known cultural parallels between the peoples of the Old and New Worlds , many Native American cultures have old myths about foreign culture bringers that relate to the beginnings of their culture and agriculture.”<