Dr Anton Mifsud is a Maltese consultant paediatrician who has devoted most of his limited spare time to the study of the prehistory of his native island. Dr. 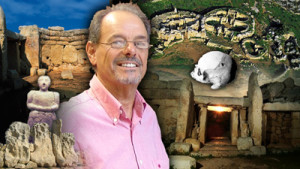 Mifsud has been the author and co-author of several works relating to ancient Malta in general and Atlantis(c) in particular [209]. He is co-author with Charles Savona-Ventura of books and articles on Maltese prehistory [210–214] as well as a lecture on Palaeolithic Man and his Environment in Malta, which is available on the Internet(a). Both Mifsud and Savona-Ventura have written [212][213] about the unusually shaped skulls found in some of the ancient Maltese temples. The similarity between these and similar skulls from pre-dynastic Egypt have been noted by Andrew Collins on his website(b), as well as in a paper by Adriano Forgione(g). The work of Collins and Forgione prompted American author, to also write a lengthy paper on the subject(j).

In May 2020, Mifsud returned to his study of the skulls with the publication of Longheads Malta [1722] on the academia.edu website(i).>This is part three of a four-part series with part four also available now(k), in which he, no doubt to the disappointment of some, concluded that “the Hal Saflieni Hypogeum skulls are alien, alien to the norm, but not alien as in extra-terrestrial.” Parts one and two are in preparation.<

Mifsud is still pursuing his study of the Atlantis-Malta connection and as expected continues to publish further material [1587][1666][1671]  in this regard. It is not unreasonable to say that Mifsud is today’s leading authority on the Malta-Atlantis theory. His work has been featured on television in the USA, the UK and Japan as well as his native Malta.

Mifsud is also a member of The Egyptological Society of Malta and has been a contributor to Ancient Egypt magazine(d). In 2005, he took part in an expedition to the Sahara where, as he explains himself “I was looking for the precursors of the Naqada people between the Western Desert and Libya. My main agenda was to identify the evidence for a significant movement of individuals from the Libyan Desert into ancient Egypt before the start of the Pharaonic dynasties. I was searching specifically for ‘Libyan warriors’ inside Upper Egypt in pre-dynastic times.”  The expedition is fully described in Sahara 2005 – Expedition 14 [1736].

Not only is Mifsud Malta’s leading atlantologist, but as his bibliography reveals, he has written extensively on the archipelago’s early history and prehistory, which saw a parade of early visitors and invaders, such as Neanderthals, Phoenicians, Egyptians and Romans.