Charles Savona–Ventura is a specialist obstetrician-gynaecologist with a strong interest in the Natural Sciences, particularly 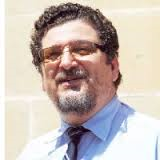 Geology, Herpetology and Mammology. His interests also include Medical Epidemiology, and Medical History.

Dr. Savona-Ventura was one of the co-authors of Malta: Echoes of Plato’s Island. He has also collaborated with his colleague Anton Mifsud on a number of other books and articles relating to ancient Malta. They have commented on unusual ancient skulls that have been found in the prehistoric temples of the island that Andrew Collins(a) has linked with similar skulls dating from pre-dynastic Egypt.

Dr. Savona has his own website(b) that includes much regarding his medical interests. Rather oddly, in 2010, he independently published a fourteen-page booklet, In Search of Atlantis [1332], which like ‘Echoes’ supported Malta as Atlantis. He also contends that Malta had in earlier times been part of a much larger landmass and supports this idea with the fact that the Maltese and Pelagian islands share species of flora and fauna not found on Sicily or the Italian mainland. This would appear to be reinforced by a map of Ptolemy printed in Ulm in 1482 which shows a large island southeast of Sicily.