Veljko Milkovic is a Serbian inventor from Novi Sad. For the past twenty years, he has been claiming that Atlantis is now at the bottom of the Danube, “more precisely, between Novi Sad, at the foot of the Petrovaradin fortress and Srem.” 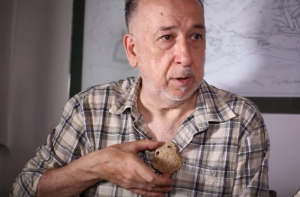 To support his claim “Milkovic also collected a large amount of evidence from the bottom of the Danube. During the low water level, numerous stone artifacts with holes, various inscriptions and markings emerged, which are obviously not carved by hand, but perfectly precisely – with a laser.”

His theory is developed in his 2020 book Panonska Atlantida (Pannonian Atlantis) [1932] with some brief notes on the internet(c). He places the Pillars of Herakles at the Iron Gates Gorge on the Danube as have several other commentators. Milkovic places Atlantis itself on the Pannonian Plain, a region where mammoth remains have been found explaining Plato’s reference to elephants.

The same report (a)(b) notes that a team of scientists from the Geological Institute in Bucharest, Romania, are investigating the Deliblato Sands in Serbia in connection with Atlantis.

(b) Look for it in the WRONG place! Veljko claims that ATLANTIS is at the bottom of the DANUBE, and he has EVIDENCE (www-magazin-novosti-rs.translate.goog)  (English)