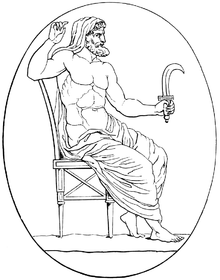 agriculture and frequently portrayed holding a sickle. He was the father of Poseidon who received Atlantis as his realm.

Cronos is not to be confused with Chronos the Greek personification of time, remembered today in our language through words such as chronology and chronometer.

Diodorus Siculus (Bk.III 61.3) describes Cronos as lord of Sicily, Libya and Italy. This reminds me of Plato’s Atlantis that controlled the Mediterranean as far as Tyrrhennia and Libya as far as Egypt “as well as islands” (Timaeus 25b)!*It should be noted that outside of the Aegean, the greatest number of island in the Mediterranean is to be found in the Central region.*

When Paul Schliemann launched his Atlantis hoax in 1912, he included a reference to Cronos as ‘king of the Atlanteans’!