Patricio Montojo y Pasarón (1839-1917) was a well-known Spanish naval officer who took part in the Spanish-American War. After 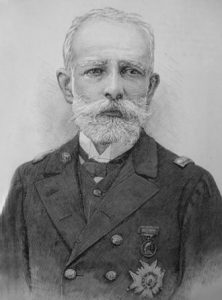 retirement from military service, he was free to pursue his other interests such as a study of pre-Columbian Central and South America and Atlantis.

Atlantisforschung.de quotes Johannes Fastenrath, who declared in 1892 that “For Patricio Montojo […] the existence of Atlantis is beyond doubt. He places it in the space between America and Europe, extending from the west of the Pyrenean Peninsula through the Azores He believes that original American man descended from the eastern reaches of the old continent and that the American Indians [the Indians; bb] descended from the Egyptians, with whom they bear so much resemblance in religion, customs, and monuments.“(a)