Jesse Neel promotes the idea that Atlantis had existed on what was an extended Yucatan Peninsula before the ending of the last Ice Age(a). He bases this idea 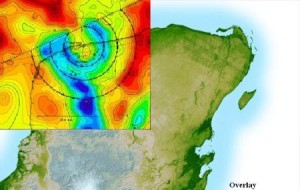 on a review of the Piri Reis Map. He contends that famous Chicxulub impact crater had concentric features that were later incorporated into the topography of the city of Atlantis and subsequently submerged as the Ice Age glaciers melted. However, any such features would have had dimension far in excess of what Plato describe’.