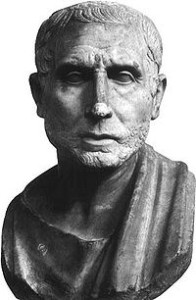 Poseidonius (135-51 BC) from Apamea in Syria adopted Rhodes as his home. He was a Greek philosopher and was Cicero’s mentor. He supported Plato’s Atlantis story when he wrote that beyond the Pillars of Heracles was a huge area known as ‘Poseidonis’ or ‘Atlanta’. It is generally thought that he wrote a commentary on Plato’s Timaeus, that is now, unfortunately, lost.