William Scott–Elliot (18??-1930) was a merchant banker and part-time anthropologist. He was author of two works 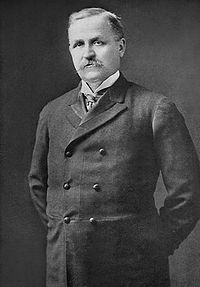 relating to Atlantis[543][544], both of which are available on the Internet(a). However, his work is mainly a re-working of some of Donnelly’s material, combined with a dash of Theosophy and a splash of racism, all of which was allegedly generated by ‘astral clairvoyance’ and by reference to ‘the Akashic Records’!

In his 1896 book, The Story of Atlantis, Scott-Elliot was one of the first to suggest that Atlanteans has flying machines or ‘air-boats’. This inclusion by him was influenced by the efforts of John W. Keely and Hiram Maxim to develop flying machines at the end of the 19th century. This silly suggestions of flying Atlanteans was revived later by Edgar Cayce with the even dafter idea that these aerial machines were made from the skins of elephants.

One of Scott-Elliot’s more entertaining revelations is that the Lemurians were 20 feet in height and had “huge feet, the heels of which stuck out so far they could as easily walk backwards as forwards.” One hopes that his banking was better than his writing.