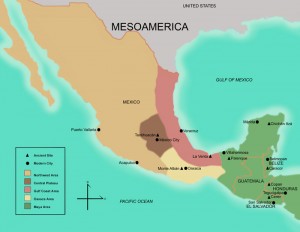 Mesoamerica is the term used to describe a region which includes Mexico and Central America that was home to a number of important pre-Columbian cultures including that of the Mixtec, Toltec and Maya peoples. When news of Columbus’ rediscovery of America got back to Europe it did not take long for theories linking the ‘New World’ with Plato’s Atlantis to develop. While most initial speculation focused on the idea that America was Atlantis. As time went by, this concept was downgraded to just identifying America as the home of refugees from Atlantis, usually located in the Atlantic.

By the 19th century the similarity between the pyramids of Mesoamerica and those of Egypt began prompting the thought that Egypt may also have been home to Atlantean refugees. However, further comparisons of ancient Indian architecture with that of ancient Central America has led to a set of new theories(a) that generally excludes Atlantis. While Jim Allen has illustrated(c) a number of interesting cultural links between Mesopotamia and Bolivia, Richard Cassaro has published(b) an extensive series of images linking Egypt and Mesoamerica.