The Scott Stones were discovered in 1997 submerged off the Bahamas and touted as remnants of Plato’s Atlantis. Through a 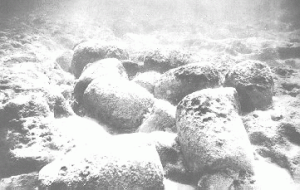 series of press releases, from Aaron DuVal, claims of dramatic discoveries were made, but never substantiated. Attempts, by writers Christopher Dunn and Andrew Collins, to view the ‘stones’ were initially agreed to but eventually they came to nothing. The most rational explanation on offer so far is that these stones are in fact jettisoned ballast. It would be prudent to consider the whole story as a badly organised hoax.