Richard Bowdler Sharpe (1847-1909) was an English zoologist, who specialised in ornithology. In 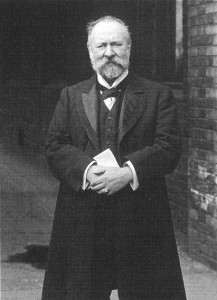 1893 he suggested that a huge continent centred on the South Pole had existed in the southern hemisphere. Newspaper reports tell us that this highly speculative continent had embraced “South America, Madagascar, Mauritius, New Zealand and Australia; and thus he explained the existence of the cognate struthious birds that now exist, or once existed, in those countries.”(b)

It might seem strange that Sharpe did not mention Antarctica, but, it is understandable, as the first recorded and confirmed landing on Antarctica did not take place until 1895(a).