Woods Hole Oceanographic Institution (WHOI) was established in 1930 in Woods Hole, Massachusetts. It is the largest independent oceanographic research institution in the U.S., with staff and students numbering about 1,000.

However, although you might expect such an organisation to maintain a conservative stance regarding the existence of Atlantis at least one of its scientists has been quite outspoken on the subject. I refer to James Mavor Jnr who openly supported the Minoan Hypothesis in his book, Voyage to Atlantis [265].

However, what is not generally known is that in the year following it establishment Henry Bryant Bigelow and Columbus Iselin, two pioneering oceanographers led an expedition to study large currents in the North Atlantic AND search for Atlantis!

In October 25 1931, the Minneapolis Sunday Tribune ran a front-page story with the headline “Searching for a Long-Lost Continent Underneath the Ocean” and a sub-head of “How Scientists Plan to Probe for Atlantis by Breaking Through a Thin Submarine Crust Under Which the Legendary Land is Declared to Be Hidden” Needless to say they did not find Atlantis. 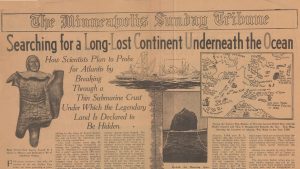