“The site is composed of some six C-shaped concentric ridges with each ring separated by a gulley. The ridges are all half circles. While the ridges range from 0.3 feet to 6 feet, they would have been much higher in the past as they have worn down over the many years. Much of the geometric design is hard to make out today on the ground, the scale and geometric design of the site only became apparent after aerial photographs were taken.“(e)

The purpose of the site is unknown, although various theories are put forward on a regular basis, one of which is that it was used as the world’s largest solstice marker(b)!

The late Antonis Kontaratos presented three papers [750.237] to the 2008 Atlantis Conference in Athens in which he expressed strong support for the American Hypothesis and that Poverty Point had been the capital of Plato’s Atlantis.

Gavin Menzies claimed [780.290] that Poverty Point was actually where the Minoans processed copper brought down the Mississippi from Michigan before transporting it back to the Mediterranean to feed the Bronze industries there! J.S. Wakefield expressed similar ideas, in great detail, in a 2015 article(d). 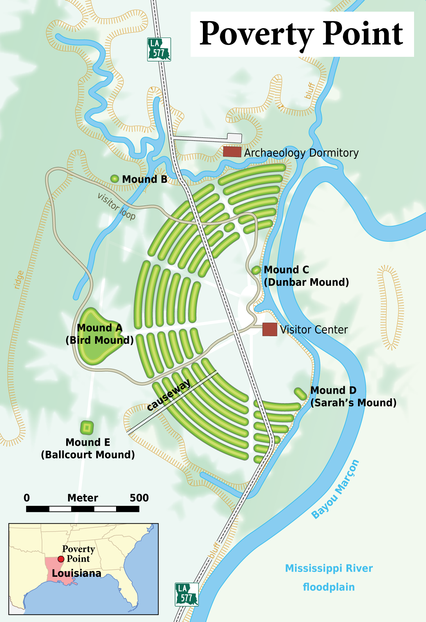 It has been suggested that the mounds of prehistoric Louisiana, including those at Poverty Point, were constructed as a protection against seasonal flooding! Poverty Point has now been designated a UNESCO World Heritage Site of which there are less than 1,000 worldwide and only 24 in the United States (2019)(f).

The results of a study of Mound A, published in the January 2013 edition of Geoarchaeology, have revealed that the structure was built in 90 days or less(a).

>Dr Diana Greenlee of the University of Louisiana Monroe and station archaeologist at Poverty Point was involved in recent research that shows Poverty Point to be more complex than previously believed. Thanks to a 2019 Preservation Technology and Training Grant from the National Park Service, ULM and Minnesota State University Moorhead were able to use radar to send electromagnetic pulses into the earth, helping shed light on what lies below and between the mounds and ridges. What they discovered was a new ridge hidden underground and more information about the creation of the site(g).<

Work continues at the site.

(e)  The History Of Poverty Point: One Of America’s Oldest Archeological Sites (thetravel.com)