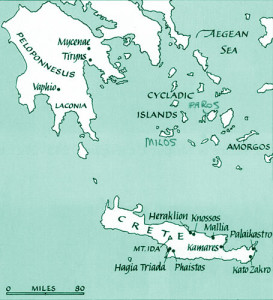 Melos or Milos is the most westerly of the Cyclades in the Aegean Sea. Dr. Galanopoulos was of the opinion that Melos was named after Eumelos the brother of Atlas, the King of Atlantis.

This view led Galanopoulos to conclude that the Pillars of Heracles were therefore located at the western entrance to the Aegean.

Obsidian, a volcanic glass, principally native to Melos, has been found all over the Aegean as well as mainland Greece and has been dated to 13,000 BC implying that that extensive seafaring was possible at that time(a). However, during that period, sea levels were much lower than at present, as the Ice Age glaciations were still in place. This would have led to greater land exposure in the Aegean with shorter distances between islands, which were easily crossed with relatively primitive boats.

A major conference on Atlantis was held on the island in July 2005, entitled The Atlantis Hypothesis: Searching for a Lost Land. At the conclusion of the conference a majority of the attendees supported a 24-point list of criteria that any candidate for the location of Atlantis must satisfy. These are listed under The Atlantis Conference 2005 entry.