The Cyclades are a group of twenty-four islands, which encircle the sacred isle of Delos, in the Greek Aegean Sea. Vasilios Kapsimalis from the Hellenic Centre for Marine Research related to the 2005 Atlantis conference how the Cyclades, which originally had a land surface of around 7000 sq kilometres, lost 75% of their area following the raising of sea levels after the last Ice Age. A pre-Greek civilisation flourished there, 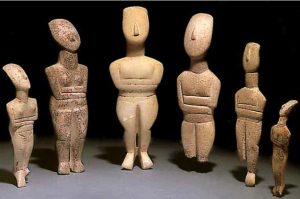 which had no written language but is probably best known today for its distinctive marble figurines. The origin of the Cycladic culture is hotly debated with Egyptian and/or Phoenician connections as the leading contenders.

Kurt L. Lambeck, a Professor of Geophysics at The Australian National University in Canberra, charted the reduction of the Cyclades from a landmass of approximately 160 x 85 km (13,600 km2) to the archipelago we know today as having an area of 2,572 km2. He suggests that a memory of the break-up of this large landmass may have been the source of Plato’s Atlantis. His findings in the Aegean have been published in Antiquity[0430] and maps of sea level changes based on his investigations are also available on the internet.

Lambeck’s sea level data has been harshly criticised by Izabol Apulia(c), who has developed a large series of maps showing the ancient coastlines of most Mediterranean islands at various stages since the Last Glacial Maximum.

Zamarro in his book[024] locates Atlantis in the Cyclades, with its capital on Melos. He contends that around 5500 BC, following the breaching of the Gibraltar Dam, the Cyclades were inundated and as the waters of the Mediterranean rose, the plug in the Bosporus broke, enlarging dramatically what was then a much smaller, freshwater, Black Sea.

In connection with Zamarro’s theories, it is worth noting that it is conventionally accepted that the Cyclades were first inhabited around 5000 BC. If Zamarro is correct, an earlier occupation date is possible but the rising waters of the Mediterranean would possibly have submerged much of the evidence for it. Consequently, any reconstruction following the inundation would be inland from the original coastline and would only show an approximate date of no earlier than 5000 BC.

Diamantis Pastras seems to have been the first to suggest a Cycladic location for Atlantis in a paper sent to the Greek Ministry of Culture in 1989. In it, he claimed that 3,500 years ago the Cyclades together with the island of Astipalea had formed a single landmass and was the location of Atlantis. He bases his theory on an interpretation of a map in the Egyptian Book of the Dead.

At the 2005 Atlantis Conference held on the Cycladic island of Melos a paper was presented [629.227] by four members of the Hellenic Centre for Marine Research, which outlines the hydrographic history of the islands that saw the gradual reduction of the much larger landmasses that existed at the time of the Last Glacial Maximum to the much smaller islands that we have today. The authors suggest the possibility that the story of this continuous flooding may have been ’embellished’ by Plato and incorporated into the Atlantis narrative! I doubt it.

In 2014, Christos A. Djonis published Uchronia – Atlantis Revealed [935], in which he claims that Atlantis lay in the Aegean Sea, to the north of Thera, which itself contained the capital city of the Atlantean confederation. However, he gives no credit to Paulino Zamarro who proposed a similar location fifteen years ago.

Jason Colavito had an interesting piece(a) on a geologist’s view when he wrote that “In 2010, geologist Kalliopi Gaki-Papanastassiou (b)  and several colleagues proposed a similar theory identifying the Cycladic 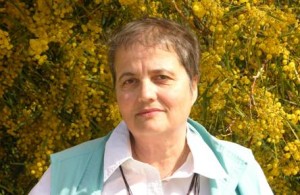 island with Atlantis in a chapter of the edited volume Coastal and Marine Geospacial Technology, though they admitted it was speculation based on the unproven assumption of the existence of a city-state and based on throwing out details from Plato that didn’t match. However, they felt confident that the existence of Neolithic cultures in the surrounding area proved that an advanced culture existed between them. They did not propose a method whereby knowledge of this city-state—but no other aspect of Neolithic culture—transmitted from the Cyclades to Egypt to Plato. Gaki-Papanastassiou also claims to have found Homeric Ithaca by studying prehistoric coastlines.” They suggested a location for Atlantis amid the adjacent Cycladic islands of Naxos, Paros and Antiparos.