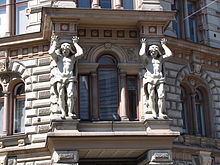 Telamons is the term more usually used in French when referring to Atlanteans. The term is derived from the Greek word ‘telamo(n)’,  meaning ‘to bear’ which is a reference to the mythological Atlas who was condemned to bear the weight of the cosmos, although later he was depicted as bearing a globe of the earth on his shoulders.