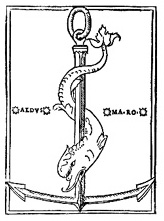 The Aldine Press was founded by Aldus Pius Manutius (1450-1515) in 1494 in Venice. It is considered to have been one of the most significant print houses in Europe and was famous for the quality of its work and typographical innovations such as the introduction of italics, originally known as Aldine Type and sequential page numbers, which enabled indexing. Aldus used a combined anchor and dolphin as his trademark. The founders family ran the business until 1597. Aldus was a Greek scholar in his own right and as a printer his contribution to Greek scholarship in the 16th century cannot be overestimated.

In 1502 he founded Neakademia, also known as The Aldine Academy dedicated to the propagation of Greek scholarship and where members had their names Hellenised and were obliged to only speak Greek.

In 1513 Aldus published the first complete Greek text of Plato in two volumes, which he dedicated to the then mrecently elected gay Pope Leo X. Aldus was also responsible for the introduction of pocket-sized books at affordable prices in contrast to 2009 when we saw a rare Aldine first edition of Plato’s works went on sale for $65,000.