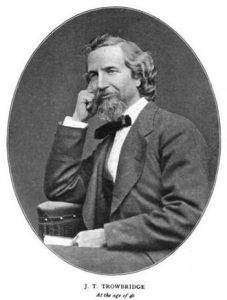 John T. Trowbridge (1827-1916) was an American poet, author and newspaper editor. He is also known to have had friendships with both Mark Twain and Walt Whitman. Atlantisforschung.de has drawn attention to Trowbridge’s interest in Atlantis(a).

Just months before Ignatius Donnelly published his seminal work, a poem about Atlantis by Trowbridge was published and produced the following comments in The Weekly Kansas Chief.(b) “For years, the world has been hanging on to speculation, traditions, romance and poetry about the sunken continent of Atlantis, which is said to have once been located in the Atlantic Ocean, in the middle of Europe and America. If you look at Cuba and the surrounding islands on a map, you are quite impressed by the idea that they are fragments of a sunken continent.

On page 1 [of this issue] of our newspaper, we publish an article and a poem on the subject of ‘Atlantis’. Mr Trowbridge suggests in his poem a theory that seems plausible. Numerous pieces of evidence have been found on the American continent indicating that there was once a people here who had a high degree of civilization. But there are no records of him, and the oldest races found on this continent have no traditions of such a people. Mr Trowbridge’s Theory is that said relics were the work of wandering or scouting groups from the continent of Atlantis. When all traces of that country, people, records and everything else, sank into the ocean, there was nothing left to tell this story.”