Cornelius Wytfliet (1555-1597) was a Flemish cartographer who flourished at the end of the 16th century and was the first, in 1597, to produce an atlas devoted solely to the Americas. He is reported to have favoured America as Atlantis. Little else is known about him. One of only nine known copies of the atlas was stolen a few years ago but was recovered and returned to its rightful owner, the Royal Library of Sweden(a). However, the theft did have a tragic ending for the thief(b).

“The terra Australis is, therefore, the southernmost of all other lands, directly beneath the antarctic circle; extending beyond the tropic of 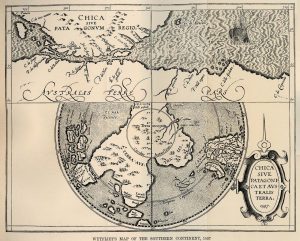 Capricorn to the West, it ends almost at the equator itself, and separated by a narrow strait lies on the East opposite to New Guinea, only known so far by a few shores because after one voyage and another that route has been given up and unless sailors are forced and driven by stress of winds it is seldom visited. The terra Australis begins at two or three degrees below the equator and it is said by some to be of such magnitude that if at any time it is fully discovered they think it will be the fifth part of the world.”

Some think this is an early reference to Antarctica!