Hyde Clarke (1815-1895) was English philologist, engineer and historian who 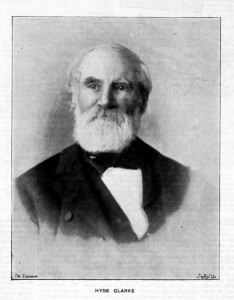 suggested[242] in 1885, that “the head seat of the great king (of Atlantis) was possibly in the Caribbean Sea; it may be in St. Domingo (Hispaniola)”. His book can be read online(a).

Clarke also held the view that ‘Atlantis’ was the name of the king rather than the kingdom.

Another of his odd suggestions was that the elephants of Atlantis were in fact tapirs!

He further claimed that Australia had been known in remote antiquity(d).